The most important features expected from the iPhone 14 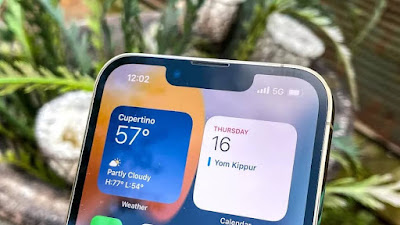 Although the iPhone 13 is not yet in its first year, we are eagerly awaiting the iPhone 14, because, rumor has it, it comes with the biggest updates on the phone's design.

Apple has been using the existing design for phones since the iPhone 10 appeared in 2018, but with some minor differences.

These differences include reducing the size of the front camera bump, giving up circular edges in favor of square and slightly sharp edges.

You can't say that these design changes are as big or revolutionary as the one that happened with the iPhone X, so everyone is waiting for the iPhone 14.

Here are a range of features that we are waiting for so much on the iPhone 14:

Use ProMotion technology with all phone models

This year, Apple introduced ProMotion technology with the iPhone 13 Pro and Pro Max, allowing the screen to operate at a high update rate of up to 120 Hz.
She decided to leave the iPhone 13 and iPhone 13 Mini models without this technology despite being on Android phones.
So everyone is waiting for Apple to use this technology with all 14 iPhone models instead of Pro models.
Apple has been able to use the high refresh rate in screens without affecting the battery.
This is because the screen does not work at the high update rate continuously all the time.
The update rate decreases and increases depending on the type of content displayed on the screen, thereby reducing battery consumption.

Back to using a fingerprint

Give up the screen bump in the iPhone 14

The screen bump may have been the latest shout when Apple introduced the iPhone 10, but it no longer is.
Many Android phone companies have abandoned the screen bump and used a mechanical camera or even a screen hole.
Camera technology hiding under the screen is also beginning to appear, so Apple has plenty of choices to give up the screen bump altogether.

The iPhones are the only Apple devices to use lightning, which Apple abandoned on iPads some time ago.
It's annoying that you need to use an iPhone charger instead of using a single port for all your devices.
So we hope that Apple will get rid of lightning charger and replace it with a USB C port or give up wired ports completely in favor of a total wireless connection to the phone.